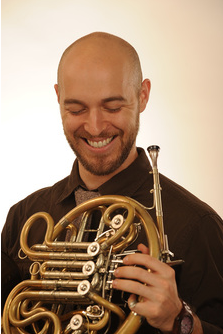 Joshua Paulus currently splits his time as a professional french horn player between the sunny Los Angeles area as the newly appointed Assistant Principal and Third Horn of the Pacific Symphony and the idyllic Pacific Northwest area as a top call Seattle-area freelancer. Equally at home on the recital stage or in the concert hall he has performed all over the United States and Europe over the course of the last decade. Mr. Paulus is an active orchestral musician and in addition to the aforementioned Pacific Symphony he has held or still holds positions with the Louisiana Philharmonic Orchestra, the Des Moines Metro Opera, and the Lancaster Festival Orchestra. In conjunction, he is also an in-demand freelance musician which has offered him the opportunity to play with many other orchestras across the country such as the Seattle Symphony, the Milwaukee Symphony, the Colorado Symphony, and the New World Symphony to name a few. Along with his busy schedule for orchestral work, Mr. Paulus also served as Instructor of Horn at Loyola University of New Orleans while in residence there and actively maintained a private teaching studio. He has always been an enthusiastic soloist, clinician, and chamber musician and has participated in festivals and competitions on both sides of the Atlantic. Mr. Paulus received his M.M. from Northwestern University where he studied with Gail Williams and Bill Barnewitz and his B.M. from the University of Dayton where he studied with Dr. Richard Chenoweth. Following his studies with Dr. Chenoweth, Mr. Paulus was a featured presenter at the 2009 International Horn Symposium and his thesis work was subsequently published as a full-length article in the October 2009 issue of the Horn Call, the journal of the International Horn Society.

Pianist Jamie Namkung has achieved public recognition through concert appearances in distinguished summer festivals, including the Aria International Summer Academy and Banff International Piano Festival. An avid chamber musician, Jamie has appeared live on KING FM 98.1 with local musicians and frequently collaborated with former and current members of the Chicago and Seattle Symphony Orchestras, Seattle Opera and the Pacific Northwest BalletOrchestra. Dedicated to music education, she has also built a successful teaching career at such institutions as Peabody Preparatory of the Johns Hopkins University, Harper College, and Northeastern Illinois University in Chicago as Visiting Assistant Professor of Piano. Jamie received a Bachelor of Music in Piano Performance from Oberlin Conservatory and a Master of Music from Peabody Institute of the Johns Hopkins University under the tutelage of Angela Cheng and Boris Slutsky, respectively. She also earned a Doctor of Musical Arts degree from Northwestern University where she held graduate assistantships in teaching and accompanying as a student of Alan Chow. Additionally, Jamie has participated in masterclasses of many renowned musicians, including Julian Martin, Stephen Hough, Yefim Bronfman, and Menahem Pressler. She currently maintains a private studio in Seattle, and serves as staff pianist at Seattle University and Teaching Artist at Seattle Opera.